My Travel Guide For a Short Stay in The Netherlands

What is it exactly about the Netherlands that is so alluring? I can’t exactly explain why but something about this magical place and especially Amsterdam just keeps me coming back. If blazing it in the coffee shops isn’t exactly your thing, there’s so much more to this place than the legal cannabis and the red light district. Think riding through the countryside on a vintage bike and eating stroopwafels by Amsterdam’s most picturesque canals and you’ve got the perfect image of what my most recent stay was like in Holland. Every corner of every street looks like the image of a biscuit box or a vintage postcard.

This week I abandoned my baguettes, omelette au fromage and berets (ok,ok, I may have kept the beret) but I did replace my Parisian lifestyle for a Dutch adventure.

Between Amsterdam and the countryside where we rented an AirBnb there was so much to discover and so many amazing things to see. For today’s post I’m sharing my photo diary and giving you the complete guide to the perfect stay in the Netherlands. The first place on the agenda to see was obviously Amsterdam. In the two days that we were here we walked nearly 50km! That’s about 31 miles in less than 48 hours!

Even just wandering around the city rather aimlessly to be honest there are so many beautiful buildings and gorgeous little houses to see all around the streets and canals.

In the central station there are lockers where you can leave your luggage which was amazing for us because it meant we didn’t have to be weighed down by our heavy bags as we wandered across the city. It was amazing being able to roam freely!

The oldest part of the city and definitely one of the most photogenic is known as De Wallen and is also the red light district. Before going to this part of the city I was a little worried about it being sketchy, especially as a woman but honestly the overall vibe of the area was fairly touristic. Like any red light district or any tourist trap in any major city, this is the kind of place where you have to pay special attention to your bags and to your belongings because there are a lot of pickpockets lurking around. Travelling on my own so much has taught me that you can never be too careful of your stuff getting stolen so just be aware before you wander through the red light district. I would honestly be more wary of that than I would be about being a woman in that area because there were even families with kids when I was walking through the neighbourhood in the evening. As long as you pay attention to your things and you’re not taking photos of the girls in the windows or turning down any dark alleyways you’re safe.

Other than that wandering around De Wallen was really pleasant and it was a lot of fun seeing the coffee shops as well as having a laugh at all of the weird sex shows and sex shops around there. The whole area is so iconic to Amsterdam that visiting the city and not seeing the red light district would be like visiting Paris and not seeing the Eiffel Tower. Plus the architecture dates back to the 14th century and is so stunning when you see it contrasted with the neon lights of the area. One of the main places I wanted to visit this time around in Amsterdam was Polaberry, which is a chocolate shop I have seen time and time again on Instagram. Not only were the chocolates and cakes that they sold there extremely picturesque but they also tasted divine too! I have so many photos to share that I’ll probably write an entire post on their adorable little cafe soon. But honestly I’m so happy I went and it definitely was one of my favourite places in the city. Just look at that flower wall and those unicorn cakepops! Does it get any cuter than that? 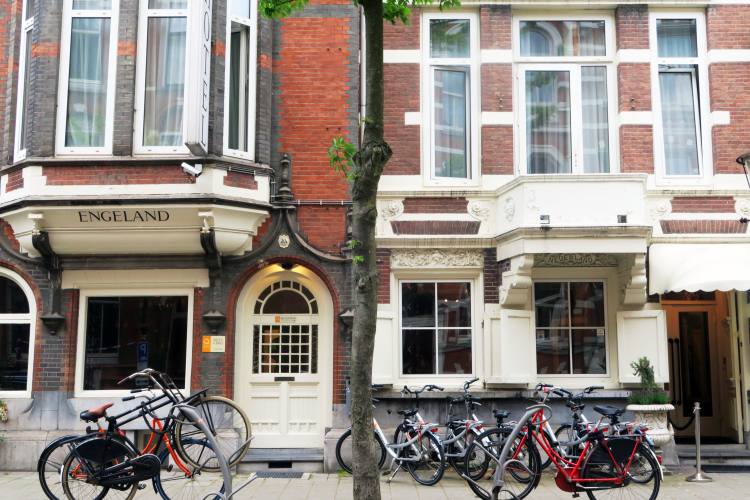 A famous sight in Amsterdam, just on the other side of Vondelpark is that of these seven houses, all with a different architectural style representing seven different countries and their own unique architectural style. Here you can see me standing in front of the one representing the Netherlands, but the English and Spanish house were also extremely impressive. There was also one that represented Paris!

I love seeing quirky little things like this whenever I travel. These buildings were like nothing else I saw in Amsterdam and they added so much charm to the city.

The next stop was the perfect café for any plant lover and that was Wildernis, located not too far away from the famous Foodhallen. Here you can sip tea, coffee and chai lattes while surrounding yourself with the calming vibe of hundreds of house plants. The staff here were honestly super lovely to us and it was quite affordable for two people. The only downside was that I wasn’t able to bring one of the adorable little pot plants back to France with me! If I didn’t have to take an 8 hour bus ride back to Paris you bet I would have brought the entire shop home with me. There is so much to The Netherlands that stretches far beyond Amsterdam. The cute little country towns here are just so adorable. There are windmills, ponies and trails where you can ride all day on your vintage bike. The land is also so flat that it makes cycling a dream. You guys will see how I spent my time cycling in the countryside in my vlog which will be up on the channel by the end of the weekend.

Honestly though, The Netherlands is the perfect place to visit if you want a short adventure away from home. Amsterdam has so much charm and if you rent an AirBnb in the countryside like how we did, you get to enjoy romantic bike rides in the fresh spring air. I couldn’t have imagined a better weekend get away!

In case you wanted a complete bucket list of what to do in Amsterdam, here is a quick little one I made for you!

That’s all from me for now. Thank you guys so much for reading! Do look out for the vlog that will be coming to our channel very soon and be sure to follow me on instagram here.

7 thoughts on “The Perfect Weekend in Amsterdam”